The Full Making of...

My bird portrait for April of 2018 features the rather spectacular Bateleur Eagle.

These eagles can be found in Africa, ranging from Mauritania to Sudan to Egypt, all the way to South Africa. They spend up to 80% of their days in flight, searching for food. They can cover over 300 miles in a day! That could explain why they can also be found in parts of the Middle East.

Pairs of the Bateleur’s mate for life. They have a rather death-defying mating ritual that involves the male diving down upon the female in flight, often rolling 360 degrees, while loudly clapping their wings. All this, while the female flies on her back. Pretty nuts!

My inspiration for this painting was provided by “Python” Paige at the World Bird Sanctuary in Missouri. Her instagram photo of Shadow, a 31 year old Bateleur, provided a fantastic reference photo for me to work from.

I got started by priming a 6″ x 6″ cradled birch panel with several coats of clear acrylic gesso. I use clear gesso to allow the wood grain to serve as a background for the bird. After sanding the gesso to a smooth surface, I do a loose sketch to help me keep the feathers straight, as well as get the positioning of the facial features in place.

As mentioned before, I like to paint on birch panels. I like the stiffness of the surface, and appreciate the beauty of the wood’s grain as a background.

Full disclosure: I really am not a huge fan of acrylic paints, but they dry quickly (at least more quickly than oils), and since my birds need to be turned around quickly for my Bird in a Box subscribers, they’re what I use. I do appreciate being able to blend, so I’ve been adding paints from Golden’s OPEN line to my arsenal.

Colors for this painting included:

I have a massive collection of paintbrushes, some of which were passed down to me from my grandmother’s collection. One thing I’ve learned is that those brushes whose bristles are no longer in pristine condition are amazing for getting great feathery-textures.

All said and done, this painting took about 4 hours to complete.

I try to balance including enough detail to render a realistic impression without getting too fussy. I also do my best to capture the expression of the bird. To me, this portrait of Shadow suggests an air of calm, mixed with a feeling of, “best not underestimate me.”

In the end, I titled this painting, “Better Keep Your Eye on My Every Move.” This is from a song, “You Know You Like It,” by AlunaGeorge. I appreciate the sentiment of that song; have a listen/watch here. 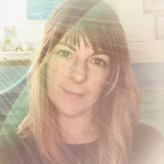 Dog Portrait Painting – Shiloh the Boxer
What does a kingfisher, sea otters, and an octopus have in common?