Orders placed between June 19 - June 28 will be shipped the first week of July. Thank you!

This listing is for a limited edition, fine art print of my original painting of a European Robin titled, “What a Glorious Feeling”

These plump birds are just waaay to adorable for their own good, don’t you think? I only wish they’d come visit California.

About the European Robin

The European robin, known simply as the robin or robin redbreast in Great Britain, is a small insectivorous passerine bird that belongs to the chat subfamily of the Old World flycatcher family.

About 12.5–14.0 cm (4.9–5.5 in) in length, the male and female are similar in colouration, with an orange breast and face lined with grey, brown upper-parts and a whitish belly. It is found across Europe, east to Western Siberia and south to North Africa; it is sedentary in most of its range except the far north.

Common to fairly common in wooded habitats, gardens, hedges in farmland, and heathland, usually fairly near cover. Hops perkily on the ground, pausing to look around, when often flicks wings and cocks tail. Also feeds by dropping to the ground from low perches, snatching up prey and flying back up to a shady perch. Plumage distinctive, with bright orangey face and breast (easily hidden when facing away); juvenile in summer very different, with bold pale buffy spotting on back and breast.

Range Map of the European Robin 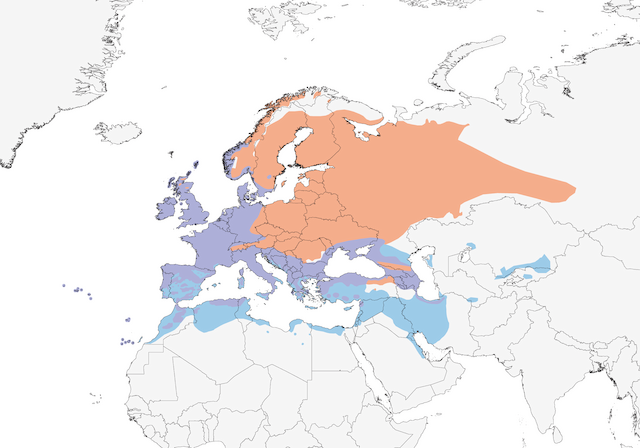 From Birds of the World